Sunday morning I woke up at my normal 5:30 a.m. and posted my "photo of the day" on my Facebook page when my dog Nitro was barking at something in the front yard.  I figured a dog was getting its work but Nitro just kept barking.  I looked through the blinds and there it was a Guineafowl in our front yard! 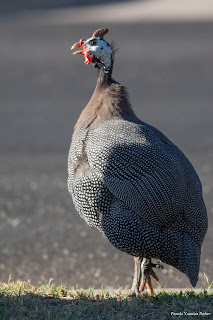 I grabbed my camera and started taking pictures of it and thinking to myself, "why is there a Guineafowl, a bird from Africa in my front yard".  Where in the world did this bird come from?  As far as I know there is no one in my neighborhood that owes one.  The historic district in downtown Mesa, you're not expecting this type of bird walking around. 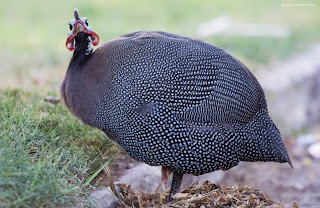 It liked hanging around my Smart Car so I put out some wild bird seed out leading it to our backyard. I figured if I got it in the backyard I could keep it safe until I found someone to rescue it.  Well it was a good plan but the Guineafowl had other plans :-) 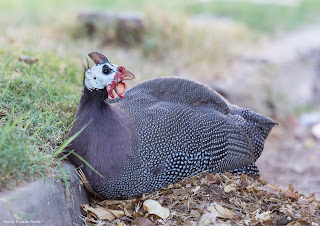 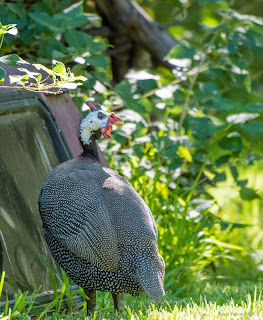 Great it's 7:00 a.m. I have an hour to figure out who owns this guy.  My neighbor Louis saw me trying to wrangle the Guineafowl and told me he sees them on Grand all the time.  He drove over there and found someone in their front yard to talk with.  He drove back to my place and we went across University to find the owner.  We knocked on the door and no one answered so back over to Grand to talk with Kay, the woman Louis spoke with earlier.  She told us this lady has about 40 of these birds and she just lets them run wild.  Kay gets so upset when she sees them getting hit by cars. All the neighbors on Grand have had it with these birds running wild.  I knew than I didn't want this bird going back to this irresponsible owner. 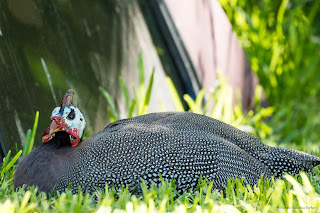 My husband calls me that Liberty Wildlife called and will have someone over in about an hour. Louis and I head back to my house.  He drops me off and I see the Guineafowl running toward Robson; yikes I don't want it to get hit by a car.  I run after it and get it to run into our neighbor Jeff's backyard.  Finally it calms down by looking at its reflection in a window of a camper shell Jeff has on the ground.  Jeff said this guy woke him up this morning chattering away on his drive way. 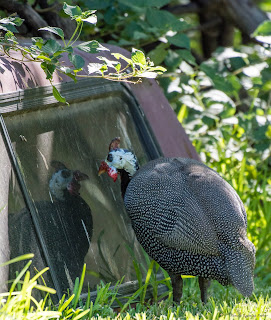 While Jeff was watching the Guineafowl I went home and get my camera, phone and a bottle of water and back to Jeff's house to watch the bird until Liberty Wildlife can come and rescue it.

After several games of solitaire, talking with my hubby on the phone, talking with Jeff between breaks of the French Open he was watching and taking photos of the Guineafowl and a Swallow Butterfly visiting Jeff's backyard Liberty Wildlife finally showed up. 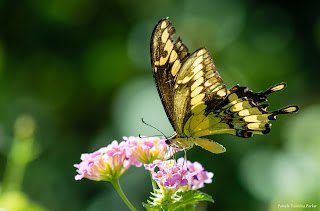 Dean, from Liberty, asked me how many people I had that could help capture the fowl, I told him 4 counting him; would that be enough?  He said yes, so I called the hubby to come over and Jeff came out to help.  Dean had two hand nets and a roll of netting and the rescue began.

Both Jeff and Dean had the hand nets and John & I had the roll of netting.  Of course the Guineafowl was not going to be captured without a fight.  The Guineafowl flew up on Jeff's fence so I went around to make sure he went back towards them; he did but got past them to Jamie's house.  We all run around to Jamie's house and by than the fowl ran across our street to Louis's house.  Louis was was just backing out of his driveway and we stop him.  We cornered the fowl on his front porch and again he gets by us.  Now he runs to our house and my dogs are going nuts.  Yes again he gets by us and across the street to Monti's house.  We get him cornered on Monti's from porch and yes you guessed it, he got us but we get him back to Monti's porch and John and I were able to get the netting around the entire porch so Dean could go in with his hand net and capture the fowl.  Good plan but the bird came right at me and I had him in the net when it was able to shimmy out and now we are all off to Jamie's house again.

He had us running all over the place from neighbor to neighbors house, I bet it was pretty funny if you were watching this from the side lines.  Finally after corning it at Jamie's house next to her car I caught it in the netting as it flew over the car.  OMG, I was so afraid it was going to get away from me again, but not this time I was able to wrap it in the netting and down to the ground in the shade until Dean could get the animal crate to us.  By now we were all exhausted, even the Guineafowl.

This is not what I had planned for our Sunday morning.  It was filled with stress, excitement and relief that this Guineafowl was going to a better home.  An animal refuge in Tonopah.  Thank you Liberty Wildlife, Louis, Jeff and my hubby for helping to rescue this unusual bird.

Posted by Photos by Pamela Yasmina Parker at 2:47 PM